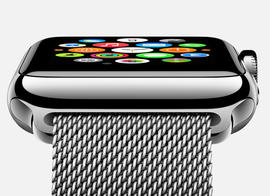 It was surprising to see, that after the pre orders for apple watch began this Friday at 3am, no watch was available for delivery prior than 4-6 weeks.

The company shared preliminary data over the weekend that it gathered from 9,080 people that did pre-order an Apple Watch in the U.S. on Friday. That sample comes from the 2 million people that use Slice, a cross-platform mobile app that tracks online purchases at the time of sale and through the delivery process.

Slice Intelligence estimates 957,000 people pre-ordered with each person ordering 1.3 watches on average; that would indicate well over one million Apple Watch pre-orders in the U.S. alone on the first day. I anticipate that Apple itself will issue a release later today providing the full weekend’s pre-order numbers; at this point, 2.5 million or more wouldn’t surprise me.

Back to my watch and some of the more interesting data from Slice Intelligence. I chose an Apple Watch Sport model with Space Gray aluminum case and black Sport band. Nearly two-thirds of the pre-orders Slice tracked were the less expensive Sport model, which accounted for 62 percent of the total orders. Unfortunately for me, Space Gray and a black Sport band were also the most popular, explaining why I won’t see my watch until May.

lthough Slice’s data says just 32 percent of pre-orders were for the more expensive Apple Watch, which starts at $549, the average Apple Watch buyer spent $707.04. That means there were a reasonable number of watch band upgrades. One quarter of the pre-orders Slice tracked included the purchase of Apple’s Milanese Loop band, for example, which is a $149 upgrade over a standard, included band. Buyers of the less-expensive Sport model spent $382.83 on average.

Apple is one of the very few smart watch makers to cater to men and women, thanks to the 38 and 42 millimeter size choices. Nearly every other smart watch I’ve seen yet comes in a “one size fits all” face and style. Slice’s data suggests that 71 percent of Friday’s pre-orders were for the larger size while the remaining 29 percent were for smaller wrists.