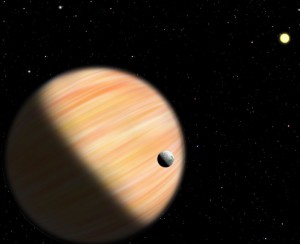 NASA Spitzer Space Telescope and ground-based telescopes named OGLE’s Warsaw Telescope has been working together to find a gas planet, located about 13 thousand light years from Earth. This planet is the farthest planet discovered ever . This discovery is done through Microlensing method. This method is based on the phenomenon of Microlensing that is the phenomenon when a star passes in front of the other. This phenomenon will emit a brighter light than starlight so can be captured by the telescope from Earth. Andrew Goul from The Ohio State University, Columbus has said that this method has proved successful in detecting new planets around the center of the Milky Way.

The discovery was made through a method known as microlensing. A microlensing event happens when a star passes in front of another. The star’s gravity serves as a lens that magnifies and brightens the light of the more distant light of a star.

If the foreground star is being orbited by a planet, the planet could cause a blip in magnification. Using these blips, astronomers have so far been able to discover about 30 planets, with the farthest located about 25,000 light years away.

“They can, in principle, tell us the relative efficiency of planet formation across this huge expanse of our galaxy,” Gould said.

OGLE’s Warsaw Telescope scans the sky for microlensing events, but since the technique can only detect the presence of planets and cannot determine their location, Spitzer provided the lacking information, giving scientists more information on where the planet is located. Such technique involving two telescopes studying an object from different vantage points is called parallax.

Jennifer Yee from the Harvard-Smithsonian Center for Astrophysics (CfA), one of the authors of three studies published in the Astrophysical Journal, which described the collaboration between scientists using the OGLE and Spitzer telescopes, said that traditional parallax techniques using telescopes based on Earth are not very effective when great distances are involved.

Spitzer, which currently circles the sun and is located about 128 million miles away from Earth, is in fact, the first space telescope that used microlens measurements for a planet.

For the newly discovered planet, the microlensing event occurred about 150 days. Both the space and the ground telescopes found a planetary blip, albeit Spitzer saw it occur 20 days earlier. The time delay between the viewing of the two telescopes was then used for calculating the distance between the star and its planet, allowing scientists to determine the planet’s mass, which is approximately half of Jupiter’s mass.

Previous PDO has been reducing Global Warming. That could be a danger
Next Varvara, A Gray whale migrated thousand miles without any guide