NASA’s New Horizons have photographed Pluto on its journey 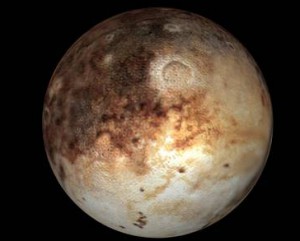 New Horizons, NASA’s spacecraft have photographed Pluto in the journey that passes through the small planet. After a journey that has taken nine years and a distance of 3 billion miles, the aircraft is expected to pass Pluto on July 14 this year. “It is like a scene of fiction, when in fact it is not,” said Alan Stern, principal investigator for the mission told Agence France-Presse.

In the three months calculated from today, New Horizons will make the first exploratory study Pluto system, the Kuiper Belt. This exploration is the furthest exploration ever undertaken by man. Pluto is actually the largest celestial bodies in the Kuiper Belt, while the Kuiper Belt is a belt-shaped region which consists of the remnants of the formation of the universe 4.5 billion years ago.

“Three months from today, NASA’s New Horizons spacecraft will make the first exploration of the Pluto system, the Kuiper Belt and the farthest shore of exploration ever reached by humankind,” Stern said.

The 1,000-pound New Horizons covers about a million miles a day — the fastest-moving spacecraft ever launched. It is powered by plutonium because solar arrays would be useless aboard the spacecraft, which is so far from the sun.

Originally known as the ninth planet from the sun, Pluto is the largest celestial body in the Kuiper Belt, an area that contains remnants of the formation of the solar system more than 4.5 billion years ago. It was reclassified as a dwarf planet in 2006.

Charon, the largest of Pluto’s five known moons, has a diameter about half of the dwarf planet and is about the size of Texas. Scientists are eager to find out if it has an atmosphere or even an ocean.

“There’s no doubt, Charon is a rising star in terms of scientific interest, and we can’t wait to reveal it in detail in July,” said Leslie Young, deputy project scientist, NASA reported.

The smaller moons, which hadn’t even been discovered when New Horizons was started in 2001, also are intriguing and offer plenty of scientific potential.

The robust New Horizons is carrying an “arsenal” of scientific instruments to study Pluto, learn about its atmosphere — which is mainly nitrogen, like Earth’s — and map its geology, Stern said.

“This is pure exploration. We’re going to turn points of light into a planet and a system of moons before your eyes!” Stern said, according to a NASA report.

Scientists are aiming the spacecraft, traveling at more than 30,000 mph, for a point 7,750 miles from the surface — no easy feat.

“We are flying 3 billion miles. We have to hit a target that is 60 by 90 miles, and we have to hit it within 100 seconds after nine and a half years. That’s the kind of precision we have to navigate to,” said Glen Fountain, the mission’s project manager at Johns Hopkins University Applied Physics Laboratory, AFP reported.

High-resolution pictures will begin arriving from the distant flyby starting in May, said Cathy Olkin, deputy project scientist at the Southwest Research Institute in Boulder, Colo.

“We are going to have surprises and discoveries over the next year and a half,” Olkin said.