Breaking News
Home / Science / PDO has been reducing Global Warming. That could be a danger

PDO has been reducing Global Warming. That could be a danger 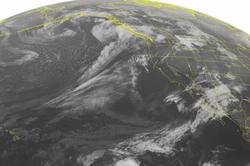 NOAA satellite image taken on Monday, March 30th, 2015 at 01:00 pm EDT shows that the low pressure with a few clouds switches to the Pacific Northwest. This phenomenon is related to the PDO, an abbreviation of the Pacific Decade Oscillation. PDO is a natural shock in the planet’s climate is accompanied by the release of heat and using word “Pacific”, as occurred in the Pacific Ocean.

PDO phenomenon is closely related to global warming. In essence, the Pacific Ocean has experienced warming then be released into the atmosphere and will affect the global climate. The study recently conducted by the University of New York and several other parties.

Now, a new study in Nature Climate Change has added additional weight to this interpretation of things.

The study, by atmospheric scientist Aiguo Dai of the University at Albany, State University of New York and his colleagues, uses a large number of climate change model simulations to investigate the apparent “pause” in surface warming of late, which has been so heavily touted by climate “skeptics” and even leading politicians like Sen. Ted Cruz.

The researchers ran multiple climate model simulations to capture how external “forcings,” or factors like human-induced carbon dioxide emissions, were expected to drive an overall climate warming trend in recent years. Then they “removed” this forced aspect of warming from the actual history of recent temperatures — and sought to identify natural or internal modes of climate variability that could explain the difference between the two.

Sure enough, the PDO — or what the authors call the Interdecadal Pacific Oscillation or IPO to denote its presence in both hemispheres — explained a large part of the deviance from what the climate models expected. In particular, this mode of variability shifted into a cool phase right at the end of the 1990s or the start of the 2000s, slowing down the rate of surface warming.

“During a cold or negative PDO/IPO phase, the tropical Pacific remains in relative cold condition while the central North Pacific is warm,” explained lead author Aiguo Dai by email, “but the global-mean temperature tends to be lower during the negative phase, as shown in our study. Because of this, phase changes of the PDO/IPO have implications for the global warming rate.”

But the effect of this kind of variation is only temporary. It has happened before, it will happen again — but it doesn’t do anything to detract from the background trend of global warming, which can be temporarily muffled but not extinguished by such a mechanism. Thus, the authors conclude, a ramp up of climate change could be in the works.

“Although it is difficult to predict the future evolution of the IPO,” the study concludes, “the recent history suggests that the IPO-induced cooling trend may have run its course and reverse soon. Should this happen, we will see accelerated global warming rates within the next few decades.”

It won’t necessarily happen immediately, though. “The PDO/IPO entered a negative phase around 1999/2000 and it may have reached its lowest point during the last few years,” Dai explains. “But it will take 10+ years before it recovers to a positive phase, if history repeats itself.”

There are two noteworthy things about this conclusion. One is that with statements like these, scientists are essentially making a testable prediction based on their understanding of the climate system. Looking at both the overall factors driving a global warming trend (like atmospheric carbon dioxide), and combining those with their understanding of natural climate variability (the PDO/IPO), they’re now saying that a snap-back of global warming could be imminent.

We can hold them to this prediction, as future temperatures unfold.

Second, this is a case study in something that scientists have long recognized — but that tends to be forgotten in public debate. At the end of the day, the planet’s temperature is the result of both anthropogenic factors like humanity’s carbon emissions, but also modes of natural variability like swings in the Pacific and changes in the output sun. You can’t understand the climate system if you don’t take both into account — and you definitely can’t adequately predict its behavior without including both elements.

Thus, in the end, it may well be that the so-called global warming “slowdown” or “pause” — used to so sharply challenge climate scientists — may lead to their ultimate vindication.