Varvara, A Gray whale migrated thousand miles without any guide 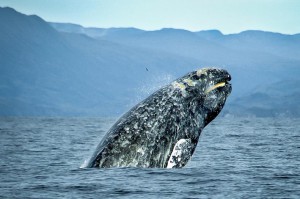 According to a recent study, Varvara , a gray whale that had migrated thousands of miles from Russia to Mexico have returned and broke the record for the longest migration of mammals. Varvara able to travel as far as nearly 14 thousand miles without using the GPS, navigation, even without seeing the coastline at all. This achievement was recorded in a journal “Biology Letters” by Oregon State University. Bruce Mate, head of the Marine Mammal Institute School has spent several years in the track direction of migration of gray whales. Some surprising results have been obtained in this study, one of which is the fact that Varvara has migrated in a way that is much different than other whales. Varvara has migrated without being guided by the coastal strip.

The feat was recorded in a study published today in the journal “Biology Letters” by Oregon State University biologist Bruce Mate, chair of the school’s Marine Mammal Institute. Mate and his colleagues spent years tracking the migration of Western North Pacific gray whales, a critically endangered species living off the coast of Russia. What they found surprised them, in more ways than one.

First, there was the impressive, trans-oceanic journey, which bested the previous record (a 11,706-mile round trip by a humpback whale reported in 2011) by more than 2,000 miles. The migration from feeding grounds in Russia to breeding areas off the coast of Mexico was made by at least two other whales: a 13-year-old male named Flex and a 6-year-old female called Agent. All three were tagged and monitored via satellite during the 2011-2012 migratory season.

The duration and difficulty of the journey has challenged Mate’s assumptions about how gray whales migrate.

“I’ve had to revise my thinking completely,” he said in a phone interview.

Previously, most gray whales were thought to remain on their respective coast lines (either in Asia or North America) and set their path by keeping an eye — or an ear — on the shore, like a swimmer following a lane line. They learn their migratory route from their mothers, who lead them from breeding grounds in the south to feeding areas up north during their first year of life, and simply repeat that journey year after year.

But Varvara made her trip without the help of any of that. Moving faster than her counterparts on either coast, she made her way from Russia to Alaska by swimming straight across the Bering Sea, an area with deep water and little in the way of landmarks to guide her. Instead of retracing her steps on the return journey, she swam a new path — this time hugging the Alaskan coastline. At least one of those routes was not the one her mother had taught her, suggesting previously unsuspected navigational abilities.

“Needless to say, we’re impressed,” Mate said. “How she did it remains to be seen.”

The trans-oceanic journey has also forced Mate to question whether Varvara, Flex and Agent were Western North Pacific gray whales (called WGWs) at all. WGWs feed in the productive waters off the coast of northeastern Russia, then swim south into the sea of Japan to breed.

Once they reached the North American coast, Mate’s whales joined a population of eastern gray whales — a group that was also hunted nearly to extinction but has since rebounded. The three journeyed south with their eastern counterparts to breeding grounds near the Baja peninsula. Since whales breed in the waters where they were born, this indicates to Mate that the three animals he tracked — as well as about 27 others for which he has photographic and genetic data — are probably eastern gray whales that ventured to new feeding grounds as their population expanded, rather than western ones.

It’s unclear what this means for the Western North Pacific gray whale population, which is thought to include only 100 to 150 members. It’s possible that the 30 trans-oceanic whales Mate knows about are simply mingling with the western stock — meaning that the western population still exists, though it’s even smaller than was thought before the study.

The grimmer possibility is that all 100 or so gray whales that currently feed near Russia are actually eastern whales, and that the western population has vanished altogether.

The International Whaling Commission, the global agency charged with whale conservation and whaling management, is currently conducting a review of North Pacific gray whale ranges, prompted in part by the recent study.