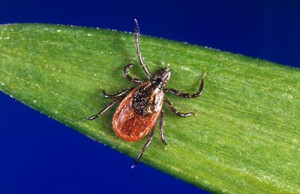 Experts are now focusing on the outbreak of the deadly virus carried by ticks. The epidemic is now allegedly begun to spread in New Jersey and known as Powassan virus. This virus has caused the death of a woman in Warren County two years ago, said Tadgh Rainey, director of Hunterdon County Division of Public Health.

These viruses cause symptoms that are very similar to the symptoms of Lyme disease, which is the story of a rash, headache and fever. According to official statistics, New Jersey is ranked 4th highest region plagued by Lyme disease. According to experts, Powassan virus tend to be more dangerous than Lyme, and according to statistics, 10% of people with this disease have died.

Some ticks found in the Northeast and Midwest are carrying something called Powassan virus.

Dr. Cameron, the President of the International Lyme and Associated Diseases Society and said the symptoms are more severe than Lyme disease. “You can get seizures, high fevers, stiff neck,” he told CBS 2 in New York.

There are no vaccines or treatments for Powassan, Dr. Cameron says that if you’re infected the best the doctor can do is support you and hope for recovery. About 10% of cases are fatal according to stats from the Centers for Disease Control and Prevention.

Powassan is rare. The CDC reports that only 60 cases of the virus were reported over the past 10 years — but the Connecticut Agricultural Experiment Station say the Powassan virus is starting to show up locally.

If you get bitten by a tick with Powassan a person or pet can be infected in a matter of minutes so, prevention can be lifesaving.

Below are the Center for Disease Control and Prevention’s tips for avoiding ticks:

– Use products with .5% permethrin on clothing, boots or tents.

– Bathe as soon as you’re indoors.

– Do a full body scan for ticks especially under arms, in your belly button and in your hair.

– Put clothing in the dryer on high for an hour to kill any remaining ticks that are hiding.

And of course, keep your pets up to date with flea and tick prevention products.