E-cigarette maybe harmful due to its flavored vapor 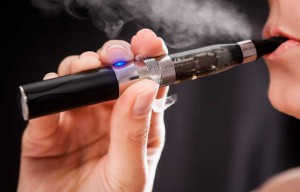 A recent study said that electronic cigarette was not healthy, because its flavored vapor can cause irritation of mucous, although the FDA has approved its steam consumption. Thus the conclusion of the study was written by James F.Pankow, a professor of chemistry and civil engineering and environment at Portland State University. James explained that the aldehyde chemical vapor contained in the e-cigarette may be safe if eaten but not if inhaled. James and his team tested the chemicals contained in the thirty kinds of e-cigarette. He and his team called for the issuance of new rules to regulate it.

The new study is authored by James F. Pankow, a professor of chemistry and civil & environmental engineering at Portland State University. Details of the finding are published in Tobacco Control online journal on April 15.

He writes, the manufacturers of such electronic cigarettes say the chemicals used in e-cigarettes are food-like. This mean they are talking the use of such flavors is like using them in food too.

Pankow mentions that these food-like products is not being ingested, but it is being inhaled, and why not FDA is listing the ingredients used in it as it does for other food products. In fact these things have never been tested for safety.

“Many folks believe that daily use of e-cigarettes is less dangerous than smoking cigarettes. But no one really knows how safe chronic use of e-cigarettes is. It is also certainly true that there are more and less safe ways to ‘vape’ – and maybe even true that some ways of vaping are quite unsafe,” explains Pankow. “The bottom line is that if I had to vape, I would definitely avoid high levels of flavor chemicals – particularly aldehyde flavor chemicals such as vanillin. The trouble is, there is no way for consumers to make informed decisions.”

Pankow and his team tested level types of flavoring chemicals which are used in thirty e-cigarette fluids. Some tested like bubble gum, some like cotton candy, some like grape and also like cherry. They found in some of the brands the levels of chemicals exceeded the recommended exposure limits.

He writes in his study that some of the chemicals used in e-cigarettes may cause respiratory irritants. He also called for new regulations on the product to reveal mandatory listing of ingredients and their limits on levels.