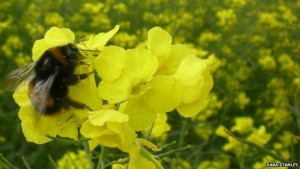 A study has suggested the fact that bees prefer certain foods containing neonicotinoid pesticide. Scientists at Newcastle University found”addicted” of the bees is probably the same as some people addicted to smoking. This study seeks to answer the possibility of bees exposed to harmful doses of neonicotinoid compound.

Another study found neonicotinoids had a negative effect on bees in the wild.

The Crop Protection Association, which represents pesticide producers, questioned the findings of the studies, published in the journal, Nature.

Bees are in decline in Europe and North America due to a number of factors, including pesticides, habitat loss and diseases.

In 2013, the EU imposed a two-year ban on using three neonicotinoid pesticides on flowering crops amid concern about their effects on bees.

Neonicotinoids contain synthetic chemicals similar to nicotine, which as a plant toxin is damaging to insects.

Neuroscientists at Newcastle University tested whether honeybees and bumblebees preferred food containing neonicotinoids over untreated food in the laboratory.

They were surprised to find that sugar solution containing two of three neonicotinoid pesticides appeared to be attractive to bees and “may act like a drug” targeting the brain.

“Bees can’t taste neonicotinoids in their food and therefore do not avoid these pesticides,” said lead researcher Prof Geraldine Wright. “This is putting them at risk of poisoning when they eat contaminated nectar.

“Even worse, we now have evidence that bees prefer to eat pesticide-contaminated food. Neonicotinoids target the same mechanisms in the bee brain that are affected by nicotine in the human brain.”

The next step is to study whether bees can become addicted to the substances, Prof Wright added.

“As soon as it gets into their blood they’re getting a little buzz, as it were, and they’re responding to that… We don’t have any evidence that it’s addictive, but it could be.”

“Given that the neonicotinoids are commonly found in our farmed environment at these levels, this may have already occurred.”

Scientific evidence over the impact of neonicotinoids has proved controversial, with debate over the relevance of laboratory studies and whether there is strong enough evidence to justify a ban.

There have been few field trials on wild bees and the results of these are disputed.

In an attempt to resolve the arguments, Dr Maj Rundlof from Lund University looked at the effects of neonicotinoids on wild bees and honeybees foraging on farmland in Sweden.

Half of oilseed rape fields were sown with seeds coated in neonicotinoids; while the other half were left untreated.

Half the number of wild bumblebees and solitary bees were found in oilseed rape fields treated with pesticides.

Bumblebee colonies stopped growing where the chemicals were present, with reduced reproduction observed in solitary bees and bumblebees. Significant effects were not found in honeybees.

Prof Simon Potts of the University of Reading said the research suggests an interim ban on the use of neonicotinoids is justified but leaves regulators with a “huge conundrum”.

“A return to old-fashioned products sprayed against pests could be disastrous for pollinators, but the other options available to European agriculture, such as natural pest management, would lead to lower yields in the short term and a big increase in food prices.”

“The latest studies in Nature must be seen in the context of ongoing campaign to discredit neonicotinoid pesticides, regardless of what the real evidence shows,” he said.

The UK government enforces the moratorium but has publicly stated it does not support it.

A spokesperson from the Department of Environment, Food and Rural Affairs said: “The EU will be reviewing the evidence on the effects of neonicotinoids on pollinators. Until this work is complete, the current restrictions remain in place.”

Both research studies are published in the journal, Nature.

Previous PostEnviromental Warning About the Effects of Pesticides on Bees Next PostIt’s MOBILEGEDDON! Your site could go broke

Audi, BMW and Mercedes to join forces with Nokia Maps for smart vehicles