Enviromental Warning About the Effects of Pesticides on Bees 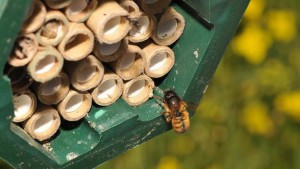 Researchers from Lund University, recently announced the surprising results of research concerning the bee addicted to the pesticide-coatedplants. This study was able to identify that wild bees are bees type that is most affected by this phenomenon, but this type of bee is the mostimportant bees in pollination.

Two such studies were conducted and published in the journal Nature revealing the devastating effect the pesticides had on these bees were recorded and observed. The ironical thing is that the second test which was conducted in a lab showed conflicting results wherein bees preferred crops coated with pesticides.

The study was able to identify that wild bees were most affected as opposed to honeybees, which are the major contributors to the pollination process. Environmental changes have already affected bees worldwide and now the use of pesticides is yet another worrying aspect, according to NY Times.

A team of scientists from Lund University, Sweden conducted a major study covering almost 16 patches of landscape wherein canola seeds were planted. Out of these 16 patches, eight patches contained pesticide and the other eight were free of it.

They observed shocking results in the bees’ reproduction patterns and ability to survive in the patches with pesticides. Their colonies remained more or less the same weight as before and only half the bees surviving here.

The lead author of this study Maj Rundlof is surprised at the results and that they did not expect to discover a problem of this magnitude. She added that neonicotinoids, the main chemicals are the root cause of the demise of the bees.

This study has reinforced beliefs worldwide on the proposed bans of pesticides which has already been enforced in the European Union. Currently environmentalists are also propagating for the United States government to enforce this ban.

Even though researchers have lauded this study worldwide, yet the fact remains that this study still has not answered all the questions. It is been unable to identify why honeybees are not affected to the extent of the wilder bees. This critical query may prove a deterrent to use this study as a conclusive evidence for environmentalist to fight for a ban on the pesticides.