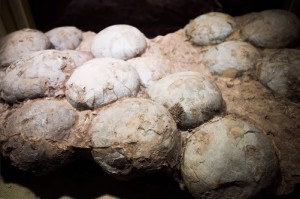 Construction workers from China have found a batch of eggs when performing roadwork in Heyuan City. Scientists were really surprised to see those eggs as 19 out of 43 appeared to be intact. Besides, the size of every egg reaches a foot and all of them have been sent to the museum for carrying out further research.

As per the curator of the dinosaur museum of the city, 19 eggs were still found to be intact. The diameter of some eggs was about a foot, making them the biggest ones that were discovered in the recent years. Scientists have sent these eggs to the museum so that further research can be done.

The City of Heyuan is also known as “Home of Dinosaurs”. Collection of dinosaur egg fossils is considered to be the largest in this city as the number is around 11,000. The city has appeared in the Guinness World record as it holds the largest collection of fossilized dinosaur eggs.

The curator of Vertebrate Paleontology of Royal Ontario Museum, David Evans stated that this area of china is very popular for the abundance of dinosaur eggs. Fossilized dinosaur eggs are considered to be the rarest ones on the Earth. The eggs have a round rock like appearance.

As per CNN, construction workers joined the workers to dig as well as remove these fossilized dinosaur eggs. They found around 43 eggs. This examination would continue so that the species of dinosaurs can be identified. As per recent reports, this batch most likely belongs to duck-billed or oviraptorid dinosaurs. However, there are suspects of this batch belonging to other species too. As per the paleontologist, this area is favorable for laying eggs due to the location and nature of the environment.