Good weather expected during the launch of SpaceX Satellite 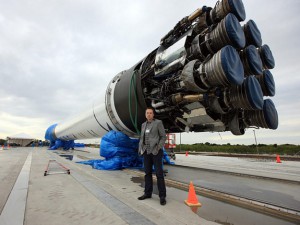 Turkmenistan is on the verge of launching its first ever communications satellite. This launch is being conducted by  France based company named Thales Alenia Space. During the launch of SpaceX Satellite scientists are predicting a favourable weather; there is a little bit of cloud built up in the sky though.

The SpaceX Falcon 9 rocket, with the satellite on top, is scheduled to lift off from Cape Canaveral Air Force Station’s Launch Complex 40 this evening at 6:14 p.m. ET, which begins a 90-minute window.  Weather conditions point to a 60 percent chance of favorable weather, though thick clouds are a concern and a potential weather disturbance may result in a lengthy launch delay; tomorrow, there is only a 30 percent chance that weather would be conducive to launching.

France-based company Thales Alenia Space manufactured the 9,000-pound satellite, which will provide television, Internet, cellular data, and phone service for Turkmenistan consumers.  Turkmenistan is a former Soviet republic now considered part of Asia, with over five million residents relying on Russian satellites for their communications needs.  SpaceX’s launch, according to the company, “will allow Turkmenistan to operate its first national satellite telecommunications system, ensuring enhanced, secure telecommunications for the country.”

Thales Alenia Space had also trained Turkmen engineers on “basic space activities and technology” that would be required to operate the SpaceX satellite from a ground control station located near Ashgabat.  The satellite was originally planned to launch in November, though SpaceX had delayed it last month due to possible problems with the Falcon 9 rocket’s helium pressurization system.  Due to a lack of fuel for a return descent, SpaceX will not be attempting to land the Falcon 9 on a target ship like it did earlier in the month, and twice before earlier in 2015.

Previous Around 46,000 motorcycles recalled by Harley-Davidson
Next Dinosaur Eggs Discovered When Performing Roadwork in China

Researchers in China have uncovered several smaller dinosaur species over the past 20 years, some …