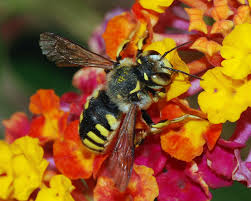 According to the research, buff-tailed bumblebees and honeybees actually showed a preference for food containing the pesticides. When the team offered bees a choice between sugar water and sugar water with neonicotinoids, the bees had a tendency to choose the latter. They also found that the bees consumed more of the pesticide laden food and so ingested more of it.

“Bees can’t taste neonicotinoids in their food and therefore do not avoid these pesticides. This is putting them at risk of poisoning when they eat contaminated nectar. Even worse, we now have evidence that bees prefer to eat pesticide-contaminated food. Neonicotinoids target the same mechanisms in the bee brain that are affected by nicotine in the human brain. The fact that bees show a preference for food containing neonicotinoids is concerning as it suggests that like nicotine, neonicotinoids may act like a drug to make foods containing these substances more rewarding,” said professor Geraldine Wright, lead scientist on the study at the Institute of Neuroscience at Newcastle University

“If foraging bees prefer to collect nectar containing neonicotinoids, this could have a knock-on negative impact on whole colonies and on bee populations,” she added.

The study is the latest in a long series of, often contradictory, studies on the impact of neonicotinoids.

In 2013, the European Union temporarily banned the use of the pesticides on flowering crops while additional evidence was gathered. However, colony collapse disorder (CCD) appears to continue to significantly impact bees in Europe. Meanwhile, in the United States were no ban has been introduced, the Department of Agriculture (USDA) announced in March that bee numbers have increased for three consecutive years.

In another study published in PLOS ONE in March, researchers deliberately dosed bee hives, over a three week period, with neonic pesticides at doses far higher than most bees would encounter over a lifetime. The researchers reported no difference in bee survival or performance between treated and untreated bee hives.

“A widely used insecticide developed by Bayer AG and tied to deaths of honeybees isn’t the main cause of the fatalities, University of Maryland researchers said in a study that may weaken arguments used by environmentalists seeking to ban the chemical,” reported Alan Bjerga of Bloomberg.

In June of 2014, President Barak Obama established the pollinator task force to look into possible causes of bee deaths and make policy recommendations to protect pollinating insects in the US. That task force is expected to submit its findings at some point this May.

When did water first exist following the Big Bang? New evidence suggests it may have …