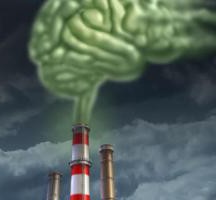 According to a new study, air pollution can lead to diseases like dementia and stroke. This study has been conducted at Beth Israel Deaconess Medical Center and the Harvard T. H. Chan Public School of Public Health by Elissa H. Wilker along with her team of other researcher from the Cardiovascular Epidemiology Research Unit.

The study has revealed brain damage by air pollution could further lead to a number of other severe neurological disorders. According to the study, even low levels of exposure could be harmful for human brain. During the study, the researchers examined about 1,000 patients. They used an MRI to examine the patients before analyzing the exposure to air pollution.

The researchers found that brain volume decreased of those patients who were exposed to air pollution for a long time. All the patients that were included in the study were over the age of 60. The patients who were diagnosed with stroke or dementia were not part of the study. The researchers found that an increase of about 2 micrograms of this fine-particle pollution matter could result in cubic brain matter reduction by more than 0.30%.

The study is the first to link between air pollution and changes in brain volume. Study author Wilker said it has been found that exposure to air pollution for a long time could affect the brain. Even low levels of exposure could harm older people and those who are relatively healthy.

She further said, “We found that people who live in areas where there are higher levels of air pollution had smaller total cerebral brain volume and were more likely to have evidence of covert brain infarcts.”

According to Wilker, the researchers have now planned to look at the impact of air pollution over a longer period and its effects on more MRI sensitive measures.

According to a report in Times of India, people infected with Hepatitis C have been …