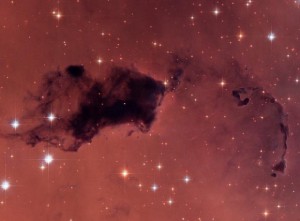 When did water first exist following the Big Bang? New evidence suggests it may have been sooner than first thought – a billion years according to new scientific research that posits certain pockets of space may have contained water vapor. Despite these pockets or molecular clouds containing a thousand times less oxygen than the sun, the amount of water vapor is said to mirror our own galaxy.

“We look at the chemistry within young molecular clouds containing a thousand times less oxygen than our sun,” said Avi Loeb, one of the researchers, in a news release. “To our surprise, we found we can get as much water vapor as we see in our own galaxy.”

After the Big Bang, water couldn’t have existed right away. Water molecules contain oxygen, and oxygen had to be formed by the first stars. In order to learn a bit more about this process, the scientists examined chemical reactions that could lead to the formation of water within the oxygen-poor environment of early molecular clouds.

The first generation of stars are believed to have been massive and short-lived. These stars generated elements, like oxygen, that then spread outward with stellar winds and supernova explosions.

The researchers also found that within molecular clouds and at temperatures around 80 degrees Fahrenheit, abundant water could form in the gas phase despite the relative lack of raw materials.

Although the ultraviolet light from stars would break apart water molecules, after hundreds of millions of years, an equilibrium could be reached between water formation and destruction.

The findings reveal that water could exist in the gas phase within molecular clouds that formed later generations of stars. The findings are published in the journal Astrophysical Journal Letters.