May Day Demonstrations in Downtown LA will attract thousands 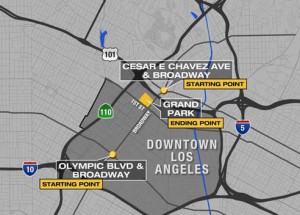 LOS ANGELES — Protesters are expected to rally in thousands this Friday for May Day in downtown LA.

Two causes will march from 12pm until 3pm. One for pro-labour starting at Cesar Chavez Avenue and Broadway for pro-immigration, and the other for pro-labor, setting off from Olympic Boulevard.

Both demonstrations – with many crossover supporters – will conclude at Grand Park.

The marches will wind their way to Grand Park and wrap up around 4:30 p.m. Surrounding street closures may affect traffic throughout the day.

Police advised residents to try and avoid downtown. The Los Angeles Police Department went into citywide tactical alert in preparation for the marches.

May Day marches are put together all over the world to support rights for workers.

Locally, activists will also focus on a push to increase the minimum wage to $15 and address concerns about police brutality.

Ahead of the marches, labor and community groups filed into City Hall Friday morning to hand over boxes of petition cards to council members. They say the cards include 100,000 signatures supporting efforts to raise the minimum wage.

“These 100,000 voices are calling for moving the wage to $15 as soon as possible without a bunch of loopholes, having strong wage enforcement provisions and giving workers the sick days that they deserve,” said Rusty Hicks with the Los Angeles County Federation of Labor.

“We’re here to raise the voices of the economically oppressed in the city of Los Angeles,” said Laphonza Butler with Service Employees International Union.

Previous Man spreads Ebola via sex, 5 months after infection
Next Why Jeb Bush may not be in President race