Why Jeb Bush may not be in President race 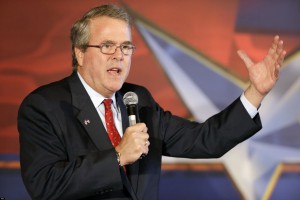 Washington — Jeb Bush won’t be running for President, despite seemingly going on the campaign trail and winning over voters with his speeches and fundraising.

The former governor of Florida says he’s simply going through the motions of a presidential campaign, but in reality is only sitting on the sidelines. Of course that doesn’t stop observers from seeing the obvious.

Recently we he treated Zeus Rodriguez to lunch in Miami, the Milwaukee educator said he appreciated Bush’s “holistic approach to the campaign.”

Bush draped his arm over Rodriguez’s shoulders and gave a squeeze: “What campaign are you referring to?” he deadpanned.

It’s not that Bush is indecisive — virtually everyone believes he’ll launch a campaign this year. Instead, campaign finance laws are effectively encouraging him to slow-walk an official presidential announcement.

Until Bush says those magic words — “I’m running for president” — he can raise money for the Right to Rise super PAC backing his candidacy himself. Once he becomes an official candidate, he’ll have to steer clear of the fundraising juggernaut, relegating it to an independent, outside group.

This past weekend in Miami, Bush told his biggest donors that he expected to beat previous early Republican fundraising records, multiple attendees told CNN, pledging that he had raised more money for the super PAC in his first 100 days than any prior Republican has ever done for their campaign in the early stages. Left unsaid were the different rules Bush plays by as he tightly skates around campaign finance rules that would make the massive hauls impossible.

“It’s probably not a fair comparison — but it doesn’t really matter, because he’s still eclipsing anybody else by three or four,” said Fred Malek, a top Republican fundraiser. “In past years, the super PAC was not the dominant fundraising figure, and you couldn’t raise in six- or seven-digit figure increments.”

Bush has reportedly set an early goal of raising $100 million for his super PAC, a target denied by Bush aides. No sums were released to donors in Miami this weekend, but Bush’s super PAC will have to disclose its total contributions this summer.

“I don’t think you need to spend a billion dollars to be elected president of the United States in 2016,” he said Sunday. “I don’t think it’s necessary if you run the right kind of campaign.”

Once he becomes an official candidate, Bush can only raise $2,700 from each donor in “hard money” for his campaign committee. His super PAC can continue to rake in record sums, but that will be sans Bush, who legally won’t be allowed to coordinate with the super PAC (though it is expected to be run by advisers clued into the official campaign’s thinking.)

Even if Bush admitted he was “testing the waters” — a Federal Elections Commission term for candidates who are gauging support for a future run — he would still be subject to that $2,700 cap.

But campaign-finance critics and Democrats eager to charge impropriety are shouting that Bush’s actions are allowing him to effectively flout all campaign laws. After all, they say, Bush has hired top-level staff, locked down influential donors and volunteer fundraisers, and traveled around the country to deliver policy speeches that surely will resemble the rhetoric spoken when he sheds his coyness.

“If Jeb walks like a duck and quacks like a duck, he should raise money like a duck,” said David Donnelly, the president of the pro-reform group Every Voice. “Jeb Bush is remaking campaign finance law before our eyes.”

Yet with the FEC stalled by a 3-3 partisan split, few expect it to reach the consensus needed to penalize any candidate.

“Governor Bush is not a candidate for office,” said Bush spokeswoman Kristy Campbell. “We are taking a conservative approach and fully complying with the law in all activities that Governor Bush is engaging in on the political front, and will continue to do so.”

Three GOP senators — Rand Paul of Kentucky, Ted Cruz of Texas and Marco Rubio of Florida — recently announced their campaigns, and three more presidential aspirants could join them next week. But for Republican candidates who have their own independent groups — like Walker or New Jersey Gov. Chris Christie — there is less of an immediate need for a formal campaign.

Longtime GOP hand Ron Kaufman, who is close with the Bush family, said he thought these new structures would improve campaigns by reducing the need for candidates themselves to pass the hat for donations.

“They can go out campaigning and do what they should be doing — talking to voters rather than raising money,” Kaufman said, arguing that everyone from Bush to Clinton was merely following what the laws allowed. “If folks have a problem with campaign finance laws, you know what they should do? Change the laws.”