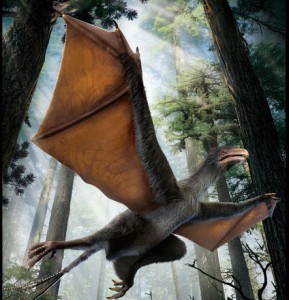 Researchers in China have uncovered several smaller dinosaur species over the past 20 years, some of which had feathers. Although this has caused scientists to rethink the origins of birds, a recent discovery of 160-million-year-old fossils in northeastern China suggests a small bat-like creature may have attempted flight with wings that had no feathers at all. Experts however are yet to understand the mechanism.

The Discovery of over 160-million-year-old fossils in northeastern China, reported Wednesday in the journal Nature, calls attention to a dinosaur species that may have tried to take to the air on featherless wings. It was one of presumably many experiments in early flight that failed the test of time and was eventually abandoned. Scientists are not even sure how it was supposed to work.

After studying findings by a Chinese-led team of paleontologists, Kevin Padian, an American dinosaur authority, said he could only think that the attempted flight innovations “have just gone from the strange to the bizarre.”

The fossil remains belonged to a previously unknown species of an obscure group of small dinosaurs, related to primitive birds such as the famous Archaeopteryx. It had feathers, but they seemed too insubstantial to be useful in flight. Then the scientists said they recognized the unusually long rodlike bone extending from each of the two wrists: curving structures possibly supporting an aerodynamic membrane.

Sure enough, patches of membrane tissue were detected along the bone supports. So, the scientists concluded, their specimen must have had wings somewhat like those of bats or flying squirrels. Nothing like this had been found before in dinosaurs.

The research team, led by Xu Xing of the Institute of Vertebrate Paleontology and Paleoanthropology in Beijing and Zheng Xianoting of Linyi University in Shandong Province, named the specimen Yi qi (pronounced “ee chee”), meaning “strange wing” in Mandarin.

“No other bird or dinosaur has a wing of the same kind,” Dr. Xu said in a statement issued by the Beijing institute. “We don’t know if Yi qi was flapping or gliding, or both, but it definitely evolved a wing that is unique in the context of the transition from dinosaurs to birds.”

Yi qi belongs to a group of carnivorous dinosaurs found so far only in Chinese fossil beds, and the few related species had no apparent flight capabilities. The group is called scansoriopterygids. In an aside, Dr. Xu said Yi qi may be the shortest name ever given to a dinosaur.

In a commentary in Nature, Dr. Padian, a paleontologist at the University of California, Berkeley, who was not part of the discovery team, said the examination of the fossils, found by a farmer in Hebei Province, had been meticulous “to be sure none of its elements had been faked or restored.”

He said the researchers wisely did not commit themselves to whether this animal could flap its wings or glide, or both, or neither. No evidence presented so far, he added, showed that Yi qi had the ability for powered flight. The preservation of the wing membrane was incomplete, and there is still uncertainty about the configuration of this wing support apparatus.

Also, most of the dinosaur’s body below the rib cage is missing. This leaves unanswered the important question of whether the animal’s tail created lift or drag in any kind of powered flight. Other discoveries will have to be made.

“We are left in a quandary,” Dr. Padian concluded. This dinosaur has a strange wing structure, he said, “that looks like it could have been used in flight, borne by an animal that otherwise shows no such tendencies.” And so far, he continued, “there is no other possible explanation for the function of this structure.”

Dr. Zheng, an author of the journal report, noted that Yi qi lived in the Jurassic Period, in the middle of the Age of Dinosaurs and early in the evolution of flight on the line to birds. “It reminds us,” he said, “that the early history of flight was full of innovation, not all of which survived.”