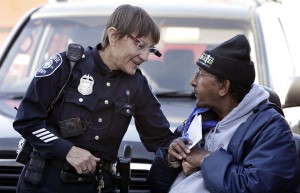 U.S. — Recent chaotic and hurtful situations between police and citizens have caused greater use of video cameras by both sides. History indicates that less occasions of use of force and fewer complaints when police officers turn on their video badge cameras.

Cop departments around the USA are shifting swiftly and purposely to change to the new concept of video recording interactions with suspected criminals, including also regular citizens.

Citizens themselves are doing it, providing graphic if not always wholly accurate evidence of such interactions. Police, in essence, are beginning to provide context with their own small video devices attached to dashboards, eyeglasses, and shirtfronts.

That effort got a boost this week when the US Justice Department announced Friday that it would provide $20 million in grants to local police departments to help buy body cameras for officers – part of a $75 million, three-year program requested by President Obama and approved by Congress.

The Obama administration has held up the outfitting of police officers with body cameras as a vital tool in not only improving accountability after the fact, but also in deterring police misconduct. At least one study found that “everyone behaves better” when officers are equipped with cameras.

“Body-worn cameras hold tremendous promise for enhancing transparency, promoting accountability, and advancing public safety for law enforcement officers and the communities they serve,” Attorney General Loretta Lynch said in announcing the matching grants, about one-third of which will be directed toward smaller law enforcement agencies.

While transparency and accountability are the new watchwords in community law enforcement, particularly in the wake of violent encounters involving white officers and African-American men and boys, police departments are having to work through technological and legal issues, including rights of privacy.

A handful of police departments have already started deploying the technology.

Officers in Ferguson, Mo., began wearing cameras after the controversial death of Michael Brown led to a rash of protests throughout the country.

The Colorado Springs police department is in the midst of a pilot project, testing different camera models for a month at a time with an eye to buying 450 of the units with an initial cost of more than $500,000.

Police in Seattle are putting on YouTube blurry, silent versions of videos taken by officers, giving the public a chance to see what they involve while also protecting the privacy of those depicted.

In December, Los Angeles Mayor Eric Garcetti announced that LAPD officers would be outfitted with 7,000 body cameras in an effort to improve transparency in policing. The Los Angeles Police Commission voted this week to make body cameras mandatory for all patrol officers.

In California, officials are debating whether officers themselves may view body camera videos before writing their incident reports.

Oakland Police Chief Sean Whent told NPR he wants to know what an officer recalls from an incident, not what the video recorded. That’s important, he says, because it goes to the cop’s state of mind. “We believe that the public has more faith in the process if the officer does not watch the video prior” to writing an incident report, Chief Whent said.

In Los Angeles, the police commission voted to allow officers to review their video before writing reports.

While there is a risk that some police officers will tailor their reports based on their videos, Laurie Levenson, a professor at Loyola Law School in Los Angeles, also says the possibility that other footage might be available could deter that.

“It may not be possible for them to be as much of a schemer as people think they can be, because you have lots of videos, not just the one that might be on the officer himself,” Ms. Levenson told NPR. “In this day and age we might have videos from other perspectives, and they cannot anticipate what those will show.”

Meanwhile, the debate over the worth of small police cameras continues.

“We are still in the early stages of documenting empirically the potential benefits and costs (including privacy, emotional, and financial costs) associated with the use of body cams by police,” Frederic Reamer, professor in the School of Social Work at Rhode Island College in Providence, told the Monitor.

But an interim report of the President’s Task Force on 21st Century Policing, released in March, pointed to the results of a 12-month study “highly suggestive that the use of BWCs [body-worn cameras] by the police can significantly reduce both officer use of force and complaints against officers.”

“They found that the officers wearing the cameras had 87.5 percent fewer incidents of use of force and 59 percent fewer complaints than the officers not wearing the cameras,” the report states. “One of the important findings of the study was the impact BWCs might have on the self-awareness of officers and citizens alike. When police officers are acutely aware that their behavior is being monitored (because they turn on the cameras), and when officers tell citizens that the cameras are recording their behavior, everyone behaves better. The results of this study are highly suggestive that this increase in self-awareness contributes to more positive outcomes in police-citizen interaction.”

Previous Six Baltimore policeman charged for grays death, murder for police
Next Reduction of Breast cancer among women due to Breast feeding

Death is unpredictable but sometimes death comes at our beckon when Germanwings co-pilot, out of …