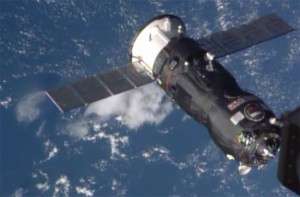 The rogue Russian spaceship that lost contact with ground control minutes after it took off on Tuesday, could re-enter the atmosphere as early as next week according to NASA. The Progress capsule was delivering over 3 tons of cargo to the International Space Station, but that will all go to waste as engineers have failed to re-gain control.

Instead of reaching the station, where a crew of six was awaiting to restock their pantries and supply rooms, Progress-59 became a pricy piece of space junk, one of more than 500,000 man-made items circling Earth that are big enough to be tracked by Air Force radars.

An investigation in the botched mission is underway. Preliminary findings indicate a problem with the capsule’s separation from its Soyuz launcher. Among the evidence: debris orbiting near the tumbling Progress capsule, the Air Force’s Joint Space Operations Center (JSpOC) reports.

“The JSpOC has observed 44 pieces of debris in the vicinity of the resupply vehicle and its upper stage rocket body; however, it cannot confirm at this time if the debris is from the rocket body or vehicle itself,” the Air Force said in a statement.

Russian Spacecraft Spinning Out of Control in Orbit

On Wednesday, the Russian space agency Roscosmos said flight controllers lost communications with the Progress spacecraft 1.5 seconds before it was due to separate from its launcher’s third stage.

“The JSpOC will continuously track the cargo craft and debris, performing conjunction analysis and warning of any potential collisions in order to ensure spaceflight safety for all,” the Air Force said.

On Friday, the spacecraft’s egg-shaped orbit was coming as close as 118 miles above Earth. Real-time tracking information is available at n2yo.com. The capsule’s designation is Progress-M 27M.