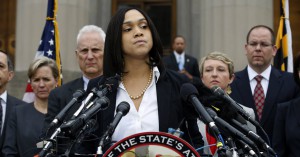 BALTIMORE — Marilyn Mosby, Baltimore’s chief prosecutor charged several cops with gross misconduct unbecoming of an officer and murder in the untimely passing of a adolescent African American man who was caused a terrible neck injury in the back of a police van. The van also made an unscheduled stop. New reporter guess this may have been where they tuned up, and injured, the young man. In any case, he died from his injuries. The court trial has fueled rage at the treatment minorities by the police.

Mosby made her announcement hours after the Maryland state medical examiner had ruled the death a homicide and a day after police handed her office the findings of its internal review of Gray’s April 12 arrest.

All six officers were under arrest Friday and booking photos showed that three of them are black and three are white. Caesar Goodson Jr., a black officer who drove the police van, was charged with second-degree murder.

The police officers’ union said they were not responsible for Gray’s death.

“We are disappointed in the apparent rush to judgment given the fact the investigation into this matter has not been concluded,” said Gene Ryan, president of the Baltimore Fraternal Order of Police.

After a convulsive week, thousands of demonstrators marched through the majority black city on Friday evening, with many believing their mostly peaceful protests over two weeks had prompted Mosby’s decision.

Previous Reduce the risk of breast cancer by breast feeding, says health experts
Next ‘Everyone Behaves Better’ when police use body cameras according to study