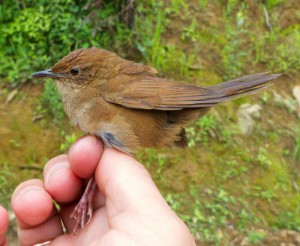 The Sichuan Bush Warbler was recently found in China in the mountain terrain. This new species has a tendency to hide in the grassy vegetation. The bird was confirmed to be a new species name Locustella Chengi.  The debut of the bird came out in a research paper published in  Avian Research. This species looks similar to the Russet Bush Warbler, and also lives relatively close to this species. They do, however, sound different from one another.

The sound has been recorded, and stored in the Avian Vocalizations Center, that can be heard from here. The new species is very hard to find and but, can be seen appearing pretty common over the region. The two species are distinguished by only slight differences and it is “typically greyer (less russet) above and on the breast-sides and flanks,” The differences that researchers noted doesn’t hold longer, and it will be very hard find the differences all the time.

The biologist at Michigan State University,  Pamela Rasmussen, who co-authored in the research paper said in a statement as,

“Its distinctive song … consists of a low-pitched drawn-out buzz, followed by a shorter click, repeated in series,”

The research paper indicates us that, it seems that the researchers aren’t too much surprised by the discovery. Researchers mentioned that, it has been just a “long history of taxonomic confusion.”