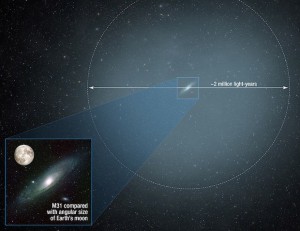 Based on data collected from NASA Hubble space telescope, scientists have concluded that the levels of cosmic gas in outer space are a lot more than initially recorded. The Andromeda galaxy is over 2 million light years away and covers the moon’s diameter by over five times.

Using data of NASA’s Hubble Space Telescope, the dark, nearly invisible halo was calculated to be about six times larger and 1,000 times more massive than previously measured. The halo stretches about a million light-years from its host galaxy and halfway to our own Milky Way galaxy.

“Halos are the gaseous atmospheres of galaxies. The properties of these gaseous halos control the rate at which stars form in galaxies according to models of galaxy formation,” Nicolas Lehner, the lead investigator on the project from the University of Notre Dame, said.

The gargantuan halo is estimated to contain half the mass of the stars in the Andromeda galaxy itself, in the form of a hot, diffuse gas. If it could be viewed with the naked eye, the halo would be 100 times the diameter of the full moon as seen from Earth – equivalent to the patch of sky covered by two basketballs held at arm’s length.

The Andromeda galaxy, also known as Messier 31 or M31, is the most massive galaxy in the Local Group of galaxies that also includes the Milky Way and about 45 other known galaxies. M31 contains one trillion stars, about double the number of stars in the Milky Way. It is estimated to be about 25 percent more luminous than the Milky Way and lies 2.5 million light-years away.

To measure the halo’s dark gas, the team looked at bright background objects through the gas and observed how the light changed. The team singled out 18 quasars residing far behind Andromeda to probe how material is distributed well beyond the visible disk of the galaxy. Their findings will be published in the May 10 edition of The Astrophysical Journal.

“This is a new milestone because typically only one quasar is used to probe the halos of galaxies beyond the Local Group,” Lehner said. “Here we have assembled a large sample of quasars that directly demonstrate the true extent of the halo of a single massive galaxy.”

With its close proximity to Earth and its correspondingly large footprint on the sky, Andromeda provides a far more extensive sampling of a lot of background quasars.

“As the light from the quasars travels toward Hubble, the halo’s gas will absorb some of that light and make the quasar appear a little darker in just a very small wavelength range,” said J. Christopher Howk, a co-investigator who also is from Notre Dame. “By measuring the dip in brightness in that range, we can tell how much halo gas from M31 there is between us and that quasar.”

But where did the giant halo come from?

Large-scale simulations of galaxies suggest that the halo formed at the same time as the rest of Andromeda. The team also determined that it is enriched in elements much heavier than hydrogen and helium, and the only way to get these heavy elements is from exploding stars called supernovae. The supernovae erupt in Andromeda’s star-filled disk and violently blow these heavier elements far out into space.

Our Milky Way galaxy could have a similar halo, but it is unlikely we will find it. Scientists predict the two galaxies’ halos may merge well before the two massive galaxies collide and eventually form a giant elliptical galaxy beginning about 4 billion years from now.

Previous Liberia Has Managed to Contain Ebola After The Long Struggle
Next WHO Essential Medicine List: Hepatitis C Drugs Added

Based on the latest data, on a monthly basis, Earth has exceeded the highest ever …