Liberia Has Managed to Contain Ebola After The Long Struggle 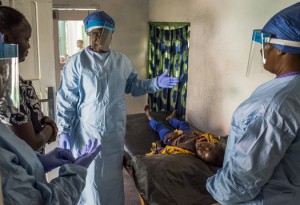 A man was admitted at a hospital in Liberia with Ebola. With little quarantine attire and adequate safety measures, 1/5th of the hospital’s employees contracted the disease and passed after spreading it to their relatives. After close to a year since the incident, the hospital is now equipped with proper sanitization, isolation and protective gear to handle Ebola patients properly.

That single case set off a chain of contagion that killed six of the clinic’s 29 employees and at least nine of their relatives as Liberia became the center of the deadliest Ebola epidemic in history.

Ten months after that fateful evening, the Logan Town clinic is now equipped with a triage room and hand-washing station near the entrance, an isolation room, a large generator and a water pump.

“Ebola will not come back,” said Bessie Johnson, a nurse. “It won’t happen again.”

On Saturday, Liberia is expected to be declared free of Ebola by the World Health Organization, having gone 42 days since its last victim was buried, or twice the maximum incubation period of the virus.

It will be a seminal moment for a country that was once so overwhelmed by the epidemic that bodies littered the streets and hospitals shut down.

“I am thrilled by the significant progress made by the people of Liberia,” said Tolbert Nyenswah, a deputy health minister. “We still need to keep up vigilance.”

The weak health systems in Liberia, Sierra Leone and Guinea, the three nations hit hardest by the disease, did more than just crumple in the face of Ebola’s onslaught last year. They played a central role in spreading the disease.

Health officials are now focusing on extinguishing the waning Ebola epidemic in Guinea and Sierra Leone. But they have a bigger goal in mind as well: shoring up beleaguered health systems that were inadequate long before Ebola struck.

“I don’t want to call Ebola an opportunity, but we’re using the experience of Ebola to try to rebuild our health systems,” said President Ellen Johnson Sirleaf of Liberia.

In the decade leading up to the Ebola epidemic, the three nations made significant health gains, especially in reducing child mortality.

But long-running conflicts, poverty, mismanagement and corruption left the three nations with some of Africa’s weakest networks of health care centers and workers.

Only 51 doctors were working in Liberia, a nation of 4.5 million people, at the time of the outbreak, the WHO says. Even the biggest hospitals in the capital lacked running water, electricity and basic supplies like gloves.

Ebola has killed more than 500 health care workers in the three countries, worsening an acute shortage.

Infections continue across the porous borders with Guinea and Sierra Leone, though in smaller numbers, and experts warn that another outbreak at some point in the region is a near certainty.