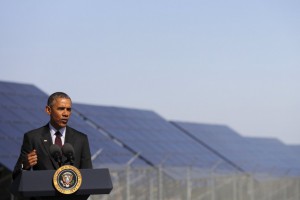 South Dakota — President Barack Obama visits South Dakota for his proposal to construct community college, in which millions of students can get an education. The president got grand reception and an appraisal from the veterans by having the flags waved by them.

Mr. president said “I have now been to all 50 states as president — and I was saving the best for last,” he told the capacity crowd at Lake Area Technical Institute. “To the other 49, I hope you take no offense.”

Mr. Obama used the visit to promote his proposal to make community college free for millions of students. “I didn’t come here today to inspire you,” he told the 720 graduates assembled in the Watertown Civic Arena, the town’s largest venue, which holds just under 5,000 people. “I came here because you, the graduates, inspire me.”

Mr. Obama was the first sitting president to visit Watertown, a community of about 21,000 in eastern South Dakota. Although he received just 39 percent of the state’s vote in 2012, his reception was overwhelmingly positive. Veterans hung nearly 350 flags around the city, and the Watertown Mall distributed 300 free flags for residents to wave.

“It’s just such an amazing thing,” said Mayor Steve Thorson. “Every other city in South Dakota is quite jealous right now.”