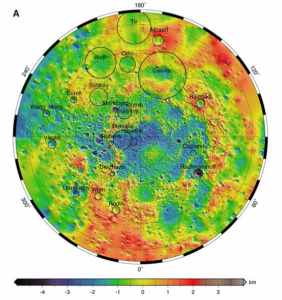 Messenger, A NASA’s Spacecraft has entered orbit near Mercury Some time ago. The spacecraft has managed to capture nearly 100 thousand images that map the gravitational field of Mercury. This week, scientists revealed that there are other facts of the planet Mercury that cannot be explained clearly. Mercury planet’s Magnetic field could be 4 billion years old.

The planet’s crust is thicker in low latitudes and thinner at the poles, a distribution that suggests the planet could have a liquid outer core. Its core is also large relative to the planet, comprising 85 percent of the planet’s radius, much more than Earth. The findings suggest that a layer of liquid iron sulfide lies beneath Mercury’s crust, which would make the planet much different from the other terrestrial planets.

Mercury’s elevation changes are also much smaller than those of Mars or the moon, the new research found. The most prominent topographic feature is an uplift inside a major volcanic plain in the planet’s northern latitudes. Somehow this area lifted up after the plains formed.

There are also some weird features relating to Mercury’s largest impact basin, Caloris, actually one of the largest craters in the solar system. The floor of the 1,500-kilometer (932-mile)-wide crater is now higher than the rim, scientists found. This implies that Mercury underwent some major topographic changes after it formed — perhaps through tectonic forces. This is still up for debate, though, and an extended one-year mission could help settle it.

The two Mercury papers will be published online today in Science Express. Check out the photo gallery for some more interesting finds from the Messenger mission’s first year.