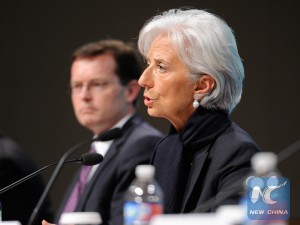 IMF urges Fed for delay rate hike until 2016, The International Monetary Fund urged the Federal Reserve to wait until the first half of 2016 to start raising short-term interest rates because the U.S. economy remains subpar.

In its annual checkup of the U.S. economy released Thursday, the IMF said that “the underpinnings for continued growth and job creation remain in place.” But the U.S. “momentum was sapped in recent months by a series of negative shocks,” including a harsh winter and a strong dollar that hurts U.S. exports.

The IMF predicted the U.S. economy would grow 2.5 percent this year, down from its April forecast of 3.1 percent.

The agency said the Fed should wait for more signs of improvement — specifically “greater signs of wage or price inflation.” The U.S. central bank has kept its key benchmark rate at a record low near zero since December 2008.

Barring unexpected good news, the IMF said the Fed should probably hold off until next year. “The economy would be better off with a rate hike in early 2016,” IMF Managing Director Christine Lagarde said.

Many economists, however, speculate that the Fed will start raising rates in September. In a speech last month, Fed Chair Janet L. Yellen said she expects to begin raising rates by the end of the year.

The top U.S. securities regulator on Thursday accused a Bulgarian man of being an architect behind hoaxes that fraudulently drove up share prices of Avon Products and two other companies through bogus takeover bids.

The U.S. Securities and Exchange Commission sued Nedko Nedev, 37, of Sofia, Bulgaria, and several corporate defendants in Manhattan federal court, after a firm calling itself PTG Capital Partners offered on May 14 to buy Avon for $18.75 per share, a 181 percent premium. That caused the cosmetics company’s shares to soar 20 percent.

According to the SEC, Nedev and others tried to manipulate prices of Avon, Rocky Mountain Chocolate Factory and Tower Group International by filing false tender offers on its public Edgar database and issuing fake news releases, and then trading on positions they had taken. The SEC said Nedev made tens of thousands of dollars in illegal gains as a result.

Attorneys for the defendants could not be identified. A Henderson, Nev.-based firm where some suspicious trades occurred did not respond to an e-mail seeking comment.

The Avon case has raised concern about the security of Edgar, to which thousands of public companies and money managers make official filings.

The Rocky Mountain case stemmed from a bogus December 2012 tender offer from defendant PST Capital Group, also from London, to buy the confectionery company at a 27 percent premium, causing its shares to rise 4.6 percent.

Meanwhile, Tower’s share price rose 32 percent in one day after a Sofia-based company calling itself Euroins Insurance allegedly offered on May 13, 2014, to buy the insurance holding company. The Bermuda-based ACP Re later bought Tower.

All about the theater shooting incident in Colorado